Mitral stenosis, a condition that affects the anterior and posterior leaflets of the mitral valve

Mitral stenosis is a rheumatic disease affecting the anterior and posterior leaflets of the mitral valve, narrowing its orifices and causing mechanical difficulty for filling the left ventricle. This increases the fill pressure in the left atrium, which is hydrostatically transmitted to the pulmonary veins and pulmonary capillary wedge, involving the possibility of interstitial oedema. This leads to breathing difficulties, with progressing dyspnoea and, in severe cases, acute pulmonary oedema. Besides medical treatment, which can relieve the symptoms, the classic mechanical treatment is mitral valvuloplasty. Since the 1950s this surgery has been performed without stopping the heart, placing a finger in the valve through the appendage. It was later performed with a scalpel and extracorporeal circulation. Mitral comissurotomy became consecrated as the ideal mechanical method to open a stenotic mitral valve.

The possibility of performing mitral comissurotomy without opening the thorax, by inflating a balloon catheter positioned in the stenotic orifice arose in the 1980s. It was found to have the same outcome as a surgical comissurotomy without extracorporeal circulation, with the great advantage of requiring only a puncture in the femoral vein. The valve’s anatomy permitting, the technique is now the treatment of choice the world over. Favourable anatomical features are the presence of a flexible valve, sinus rhythm, critical stenosis notwithstanding, the lack of significant regurgitation and calcium in the valve, and a sub-valvular system without excessive tendon and papillary muscle retraction. All these aspects can be studied by echocardiogram.

The procedure is through right-left catheterisation by femoral puncture. After a baseline haemodynamic study and quantitation of the mitral area, an inter-atrial transseptal puncture is performed to access the left atrium, crossing the narrow valve with a balloon catheter that is inflated with contrast to perform the comissurotomy and open the valve. The haemodynamic and angiographic outcome is then evaluated (Figure). A simple femoral puncture enables an early discharge (24-48 hours) with immediate symptom relief. Appropriate follow-up is by echocardiogram. 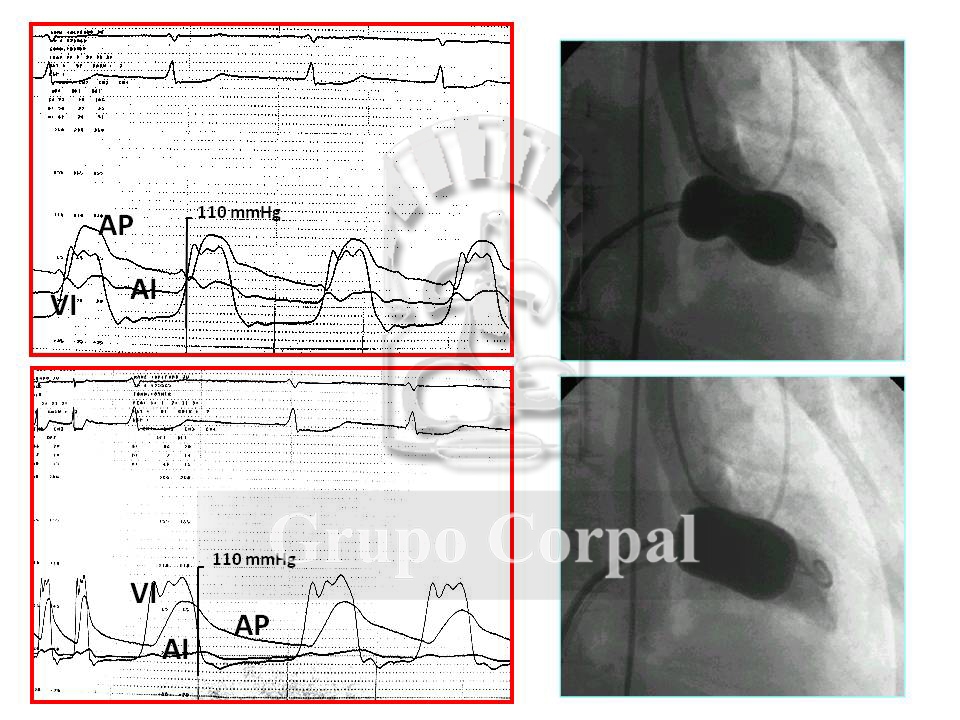